Fluffy was enjoying a good sleep under the moon that was bleeding purple jelly into the ocean. A tap on the shoulder roused him, and he opened his eyes to see who it was.

It was himself. Staring into his own eyes, the blue canine uncurled from his sleeping position and stood on all fours, nose to nose with this other blue canine who looked exactly like him.

The other Fluffy burped Dr. Pepper at our own Fluffy, swung around and bolted away at the speed of light. Our Fluffy absorbed the residual soda power from the air and activated his own Faster-Than-Light slipstream. For several light years he remained in pursuit of this imposer. He had so much to ask: are you me from the future? Do you know more about me than I do? Where’s the nearest piece of sheet music

After passing sixteen planetary systems and going through four black holes (real nuisance, those), the Fluffy felt another tap on the shoulder. He turned to look, and sure enough it was himself again. The impostor Fluffy veered and collided with our Fluffy.

The resulting explosion created a new supermassive black hole. Matter immediately began to collect around it, followed by a burst of star formation, then planets, then life emerged. Beautiful as it was every time it happened, Fluffy was annoyed when they sent their paparazzi after him.

Right on cue, as the Fluffy was shaking his head trying to clear his mind and get his bearings, eighteen creatures about half his size with flash cameras zoomed in and started snapping pictures of him.

Fluffy was out of F. T. L. energy, so he paddled his way through spacetime faster and faster the hard way until he was out of reach of the flashes and out of sight of the galaxy.

He expected the universe to have ejected him for that little event—universes tend not to like people going around creating things without filling out the proper forms first—but this time Fluffy stayed perfectly within the confines of reality. He found a hard segment of spacetime and curled up, his floofy blue tail covering his nose.

Fluffy had a dream, but dream sequences are a boring and overused technique of storytelling, so it shall not be transcribed here. Suffice to say, he relived the incident in his mind again, and the remembered impact was just as potent as the real one. A new supermassive black hole formed, another galaxy formed, et cetra, et cetra, and then the paparazzi found him again. Their flash bulbs woke up the Fluffy, and now he had to speed away again, but these people had come prepared with superfast rocket ships and held pace.

The Fluffy bemoaned this development until he realized all of the ships were powered by Dr. Pepper. The blue canine collided with one ship, phased through its hull and into its power core. Now refueled, the Fluffy shot away not just Faster Than Light, but Faster Than Paparazzi. Since this is mathematically impossible, he left a string of supermassive black holes in his wake, spurring a flurry of new galaxy creation and new paparazzi pursuers. Now the universe ejected Fluffy, leaving him in peace. The Fluffy curled up on top of an exploding star and went to sleep once again. 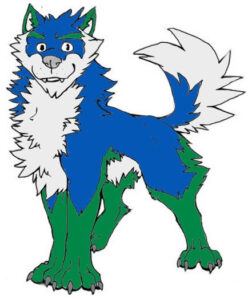