Fluffy and the Sharks by James l. Steele

The blue canine (which the reader will recall is named Fluffy) walked happily to work. He used two legs for locomotion this time, purely for variety’s sake. He passed only one person on his way, and this person happened to be the only other person who lived in town, and she was not his employer.

The Fluffy sniffed each tree in the garden, touching them one by one. The plants became happier, and they started singing. Fluffy sat on all fours and swayed to the music, but then one of the trees began to sing slightly out of harmony with the others. Fluffy’s ears zoomed in on the individual. He walked up to it and gave its pink leaves a tug. The tree recognized the signal and fell back in harmony with the others. The Fluffy sat down again and danced.

By pure coincidence, the music the trees were making happened to correspond to an ancient ritual designed to summon a demon, and one of them heard the summons and burst up through the ground, veiny muscles bulging, awaiting instructions. The Fluffy leaped to and fro in glee, tail waving about, and began to tell the demon his one true wish.

At the very moment he started to speak, a weak gust of wind wafted through the garden, swept Fluffy off the ground, and carried him to the horizon in less than a heartbeat, leaving the over-muscled demon standing alone in the garden. With nothing else to do, the demon danced to the tree music.

Meanwhile the gentle breeze carried Fluffy so fast he broke through the curvature of spacetime and spilled out over a Jell-o ocean, strawberry flavor. Fluffy fell head over paws eighty-one times before landing in it. He submerged halfway down to the bottom of the ocean and held still, suspended in gel.

Fluffy rather liked it here, and if weren’t for the sharks, he would have stayed here a while longer. But the sharks were coming closer, and Fluffy decided to get out of their way, not because he feared being eaten (such a fear was completely unknown to the Fluffy), but because they were named Bob and Bob, respectively, and Fluffy knew better than to annoy Bob by getting in the way of whatever they were in the middle of.

The canine swam up through the strawberry gelatin and surfaced easily. He sat down on the surface and waited for someone to notice him. Six minutes later a taxi pulled up, and Fluffy climbed in.

The driver took him to the shore, and after paying his fare with a few handfuls of uncut diamonds, he disembarked and wandered around town. It was inhabited by more gelatin sharks, all named Bob, including the women.

Fluffy decided to stop running and introduce himself to each person one by one. This took him several years, but the effort paid off, as everyone became his friend and let him stay with them. All their houses were filled with Jell-o of various flavors, so Fluffy couldn’t stay inside them for too long or he might have a diabetic episode.

One particular shark took a special liking to the Fluffy and bought him a special padded bed just his size, and Fluffy slept by the fireplace. She had cleared half his house of gelatin just for Fluffy, and every night Fluffy curled up in her lap and went to sleep.

Tonight she sang Fluffy to sleep. Her song happened to match an ancient melody used for summoning demons, and the demon emerged again, bulging muscles flexing in anticipation of destruction and death. Finding only a sleeping shark and a blue canine curled up and snoozing in front of a fire, the demon curled up next to them and went to sleep. 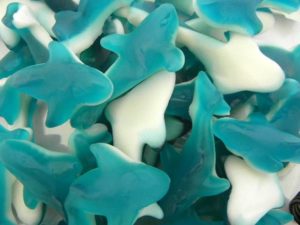