Fluffy was frolicking in the field of daisies.

He did this for months from sun up to sun down and never tired of it.

A meteor struck the land at the horizon, sending a wave of wind and fire rushing around the world. The flowers did not want Fluffy to stop having fun, so they resisted the flames and the wind and held fast. The field of flowers remained in tact, though the rest of the forest was flattened and charred to a crisp.

A volcano tried to emerge in the middle of the field, but again the flowers resisted anything coming between a creature so pure and innocent and carefree and happy, and his frolicking. They pushed the magma back where it belonged. The volcano begrudgingly sprang up on the other side of the continent instead, coating the area in lava and ash. Out of courtesy, it did not spread its ash anywhere near Fluffy’s flower field.

Weeks later, a thunderstorm tried to roar through, sending down eighteen tornadoes at once and demolishing everything the volcano and meteor had not already touched. The daisies resisted the storm, and the clouds were so intimidated they bent around the field, leaving it sunny and dry as the Fluffy frolicked to and fro. Tornadoes and rain deluged the area around the tiny field, but none of it touched the flowers or the Fluffy.

The flowers were happy so long as the Fluffy was around, and the Fluffy made sure to touch every single one of them.

Just a day after the storm, the moon fell onto the surface of the world, shattering the planet to pieces. The flowers held their tiny plot of ground together as it flew into space, and the Fluffy frolicked all around. The flowers held onto the air, and they were very happy to provide for the Fluffy.

The flat field of daisies drifted off into space.

Fluffy jumped and bounded and twisted and rolled and pranced and touched every single flower every day. Fluffy’s joy was their light, their air, their nourishment.

The daisies were never happier. 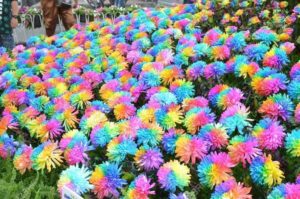