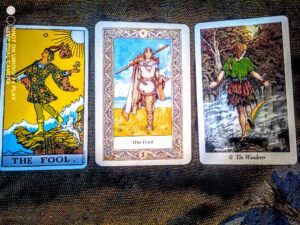 Today, the one also known as Fluffy, brings you late in the day, the Fool.

This is the first card of tarot, dubbed number Zero. He is the character who sets out on a journey of Discovery. In most decks he is depicted as if he is ready to jump off a cliff. He has a small animal companion, and most of his belongings hung from his walking staff.

Often he is dressed up as a fool or jester. If people are familiar with who or what type of person this is, they would know that he is the king’s play thing. The one who makes an ass out of himself to amuse people.

In tarot, he is the one who is without hurt, deceit or trauma. He has no reason to fear. He has yet to go on a journey. He does not know what will happen if he goes over the cliff. Will he tempt fate and go over the cliff?

I have 3 different images posted. One showed the cliff and the fool may fall over. The second shoes something that could be a cliff, but the fool isn’t facing it. The third shows the fool going over the cliff. But he is traversing a rainbow bridge.

All 3 situations are possible. We are several weeks into the Corona viruses pandemic. How is everyone doing? Has anyone started a new journey? Are you fooling around with something new? How do you feel about it your new adventure?