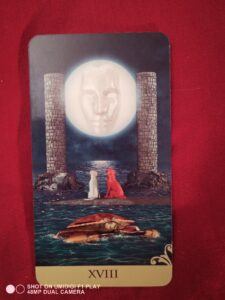 Today is the day when the moon has gone dark, so todays daily tarot card is “The Moon.”

What does the tarot card “the Moon” mean?

The Moon is the 18th card in the tarot. It Typically has a wolf and a dog howling at the moon. There is a stream flowing between both animals. A wolf and dog represents the tamed and the untamed aspects of the mind. The small pool of water symbolizes the subconscious mind, while the moon represents the conscious mind. There are two towers on either side, representing thought and reason.

Overall, this card represents illusion and deception, When this card comes up during a tarot reading it often means a time of confusion or deception. It is a time when things may not appear as one would expect them to. There may be a misunderstanding or some other source of doubt one is struggling with.

Why is this card revelant on the dark moon?

For those people who follow the lunar calendar, it is important to know when to look within and to do something called “Shadow work.” When the moon goes dark, it is time for us to look within to see what sort of healing needs to be addressed. The Moon represents intuition, emotions, the unconscious mind and dreams. We can look at each symbol on the Moon card and identity which part of the image corresponds with whatever emotion or thought we are struggling with.

The Moon shows us a wolf and a dog. Where are we in our lives? Most people are feeling caged in and domesticated like a dog. They roll over, play dead and bark on command. They usually have loyal humans taking care of them and makes sure their every need is met. Some are abused and ignored and have behavioral problems as a result. A wolf is strong, independent, wild and admired. They are also feared, often misunderstood and often hunted. Which type of animal are you? Do you embody the worst or the best?

Often a person is a mixture of both, and has a hard time finding stability in tier life. They may want to be free of the set of constraints their family or coworkers have placed on them. The dog may wish to be the wolf. They roam where they want and do not worry about the things of daily life. The Wolf may look at the dog and see that they want for nothing. Food, love and shelter are always there.

The other side of the situation can also be true. The dog may see the wolf and know that the wolf only has loyalty to himself, has to steal his food and cause fear wherever he goes. A wolf could look at the dog and think that the dog is soft, unfit to live out in the real world.

Neither perspective is right or wrong. We need to look within ourselves to find out who we are and what we want in the world. Both the wolf and the dog are looking up at the moon and are howling. The moon is aware of both the wolf and the dog. We think, feel and act on a conscious level. This is the moon that bears witness to our mind and bodies actions and reactions. We tell ourselves (the howling) stories about what we are doing and how things should turn out.

Behind the wolf and the dog lies a small body of water They are to busy trying to get the moons’ attention to notice the body of water ripples with mystery and light. That water may intact be the ocean. What happens if there is a wave and washes the animals way? The unconscious mind has control of most of your being. Ignoring the unconscious mind usually leads to future turmoil. This is where the wolf and the dog emerge. The tame and the untamed emotions of the mind are brought to light. Could both animals have just risen from the water?

As the moon has grown dark, our attention no longer focuses on the moon. We need to turn around, to the water and the unconscious mind. Allow the towers of thought and reason to fade in the distance and for the tamed and untamed emotions to silence tier eternal chatter. All that is active shines down from the above, and the flowing water. What do you hear? What does both parts of the mind say?

This is where we go to do we shadow during the dark moon. We ask our selves how we are doing. We find out what we want right now. Are we satisfied with what we have been given and taken? Throughout the month we spend much of our time and energy taking care of those things in our lives that take up all of our free time and energy. This leaves almost nothing left for our selves to propel ourselves into our future. We are left exhausted, unhappy and powerless.

It does not matter what the conscious mind things, says or wants. “That” (this term is used intentionally) is just an outgrowth of our waking desires. It takes a lot of effort to convince the slumbering mind what we want is important enough to be paid attention to. True progress happens when we learn how to all our conscious mind to become humbled to the sub-conscious mind. For when there is alignment in the mind, there is a similar correspondence to the body and the soul.

Once both parts of the mind start to work together, we begin to learn how to manifest our desires. We can take control of our lives and make changes for the better. Our world just invested with the corona virus. Nothing works the way it should. Self-care and reflection are more important than ever. As the moon goes dark, what will you reflect on?